There are often tasks required by your job that people don’t tell you.

It is often important to adapt along with change for your client and superior’s satisfaction.

The satisfaction of a client is often a satisfactoion for you as well.

Although I am someone who appreciates fine literature, is text always the best way to portray ideas and themes? Regarding Kurt Vonnegut’s “Harrison Bergeron,” I believe that Charles Tuttle’s film adaptation helps enliven and visualize the true depth of the story better than the short story does. For example, in the short story, Harrison is yelling “I am the Emperor” to everyone who is in the studio or watching the live broadcast (3). Meanwhile, in the film adaptation, Harrison doesn’t have this sort of tantrum and instead reveals how he has been a “prisoner of the state who was sentenced without trial” (Tuttle & Halvorssen, 2009). Although both interpretations show an upset and angry Harrison, the film takes the idea in a more realistic and fluid manner. In the film, Harrison tries to get his message across and provide entertainment, while in the short story, Harrison seems to want to show his dominance and have fun with the stage crew and audience. Additionally, in the short story, Harrison and the ballerina he chose to be his empress “leaped like deer on the moon” when they were dancing in the air (4). Meanwhile, in the film adaptation, Harrison and the ballerina that came forth to be his volunteer danced elegantly on stage to the music in a more realistic manner (Tuttle & Halvorssen, 2009). The two interpretations both share a common theme of Harrison dancing with a ballerina, but the former takes it in a more mystical and fantastical tone, while the latter is much more realistic and serious. Finally, in the short story, Diana Moon “[comes] into the studio with a double-barreled ten-gauge shotgun [and] fired twice” at Harrison and his empress (5). However, in the film adaptation, Diana Moon walks into the auditorium and takes a gun from one of her subordinates before aiming at the duo. The former displays a more sudden and unexpected action which may catch the reader off-guard and also provide a feeling of dissatisfaction, while the later shows a slow and suspenseful event which keeps the viewer on their toes. The film adaptation allows for us to watch clearly as events go by, instead of the short story which has less believable plot advancement. Due to all these factors, I believe that the film adaptation 2081 is a better medium for viewing and understanding the story of “Harrison Bergeron.”

“I ask you to judge me by the enemies I have made.” – Franklin D. Roosevelt

I sought after Franklin Roosevelt as an eminent person for “Night of the Notables” after hearing that Roosevelt the only U.S president to have served more than two terms. However, this was merely a morsel of Roosevelt’s vast array of achievements. Franklin Roosevelt was a charismatic and revolutionary man who rescued the U.S from the brink of economic collapse, built the New Deal Coalition, spearheaded wartime alliances, and redefined the federal government while being unable to walk. Roosevelt is an international legend and hero who I aspire to be as great as.

I believe that I share the quick-thinking, charismatic, ambitious, and headstrong qualities that Franklin Roosevelt. These qualities are some of the many defining characteristics that lead to Roosevelt’s continued success and vigorous perseverance. Roosevelt used these qualities to influence the people around him into a change and ushered in a new era after the Great Depression. Roosevelt’s journey is similar to my goal in TALONS, which is to make a difference among my peers and hopefully influence them in some positive way. Although Roosevelt was a stunning and cunning man, it may be hard to relate to him because he had more opportunities as a person than most people. From young, he had lots of connections to important people, such as his fifth cousin who was president of U.S before him. I may be able to exemplify his ambitions and goals, but his upbringing is different to mine in many ways.

Franklin Roosevelt was the 32nd president of the United States and entered office during the worst economic crisis in history. He helped millions of Americans by building the New Deal Coalition and bringing the federal government into a new perspective. After building a much more stable economy, Roosevelt led America in one of the worst wars in history. He led successful wartime meetings with Britain and the Soviet Union during World War II and helped build the atom bomb which ended up saving thousands of Americans. Franklin Roosevelt is someone who has been recorded in the annals of history and will continue to be an inspiration to people in the future. However, his journey was not a smooth rise to success. Roosevelt woke up one day to find that he could no longer walk, but that did not stop him on his road to success. The small setback had only ignited his desire to keep moving on forward which is why he is someone who everyone should know about. Franklin Roosevelt is a man who achieved a lot, while facing off with even more. We should all learn a bit from him and understand that setbacks are merely whetstones to consolidate your ambition. 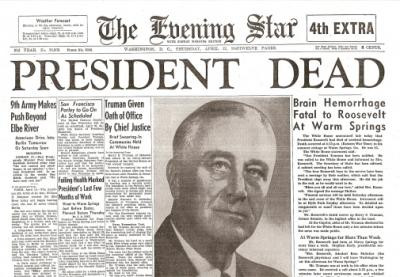 Stories help us view the world and portray a certain meaning and idea into the things we see. But what happens when the story only paints half the picture, only shows one side of the coin, or gives us the wrong information? In Chimamanda Ngozi Adichie’s TED Talk, we see how she has firsthand experience with the danger of a single story. The idea that a story can drastically change our perception and our understanding of the world. During the TED Talk, I learned that it is often important to collect information from a myriad of sources before synthesizing it into a picture that you base further discoveries upon. When Chimamanda says “their poverty was the only story I had of them,” she hadn’t realized that Fide’s family could be something more than poor. Chimamanda had limited her perception of Fide’s family to poverty and nothing else due to the ‘single story’ she heard from her mother about how poor his family was. When Chimamanda says “I didn’t know there could be people like me in story books,” she expresses a newfound understanding that the characters in books didn’t always have to be blue-eyed. Chimamanda’s understanding of literature was limited to blue-eyed characters who talk about the weather because that was the only type of book she had read. When Chimamanda reads her first “African book,” she learns about a whole new side of literature that was out of her understanding. This shows how we should always explore all sides of the story before consolidating your knowledge into your perspective. I believe the way to combat the danger of a single story is to search for more information from the topic and coagulate all sides of the story together. It should not be a single story, but instead multiple stories which contribute to your understanding of the subject.

In George Orwell’s 1984, I was impressed by the way Winston managed to carry himself and integrate his behavior into the crowd around him during the “Two Minute Hate.” The quote “Winston found himself shouting with the others” shows how he carried himself amongst the emotional disarray which displayed his strength of being able to assimilate into the surrounding culture even against his own beliefs. However, the way he had to keep allocating his hatred to different people expresses how he had difficulty matching the fervor disgust for Goldstein that everyone else had. The quote “Of course he chanted with the rest […] but there was a space of a couple of seconds during which the expression in his eyes might conceivably betrayed him” shows how Winston wants the event to be over as soon as possible and fears being caught for his true intentions and lack of worship to Big Brother. Winston faces a terrible external conflict because of the surround members of his party having their eyes on him as well as the unknown factor of Big Brother and the Thought Police watching his every movement. The development of Winston seems very believable, especially when you consider the amount of stress and external pressure is being placed on him. He is in a constant war against himself on what he can do and what he should do whilst being frightened at every moment by the possibility of the Thought Police catching him. I am satisfied with how Winston has developed as a character and believe he is someone who should be looked up to. He is very easily adaptable and can make the best out of any situation. Even with all his inner turmoil and external advances upon him, he has managed to keep his true thoughts secret from the Thought Police and Spies. The way Winston is always on edge and always must keep his guard up around everybody makes me feel a sort of connection because I also feel like I must hide my true thoughts from other people sometimes. If I had the same conflicts as Winston, I would handle them in the same way. I believe he has handled them in the most reasonable and mature way possible. The only thing I wouldn’t do is risk my life to keep going into the prole district since it is another reason for the Thought Police to catch him.